Scotland vs Zimbabwe Betting Tips & Prediction from experts. Technical analysis and past performance has been made while writing these predictions

Scotland has an odds of 2.14(If you place a bet of INR 100 on scotland winning scotland vs Zimbabwe match, he will get INR 214 back. ) BET NOW

This pitch is well suited for both departments and the winners of the toss should bat first. The last three Twenty20 internationals played at the Grange saw the team that won the toss elect to bat, and rack up over 160 runs on each occasion.

scotland has a strong winning record versus Zimbabwe. scotland owes its victory in the first match largely with the help of Richie Berrington who top-scored with 82 runs. scotland had a disappointing start as they were reduced to 30-4 within the powerplay. Only two other batsmen reached double figures and none of them crossed 15 either. That one bad performance does not make Scotland a bad batting team, though.

Kyle Coetzer, George Munsey, and Calum MacLeod are scotland’s star batsmen. The team will expect Mark Watt and Safyaan Sharif to take the bulk of wickets. Although, they do have the home advantage too.

Zimbabwe has failed to qualify for the forthcoming T20 World Cup. They will be looking to put on an improved show against scotland. Brendan Taylor, who was earlier named in the squad, played his final international match on Monday in Belfast against Ireland. After announcing his retirement, Craig Ervine will lead the side and Regis Chakabva will keep the wicket.

After a disappointing start to their T20I series against scotland, Zimbabwe will now try to overcome their bad performance.Zimbabwe got off to a great start in the previous match as it picked up four wickets inside the powerplay but they are failed to continue it.Zimbabwe’s problems in the batting have been at the top of the order and that was the case once more. .This unpredictability of the Zimbabwe batting lineup is something that has been its downfall for quite some time now.

Rockodds Prediction for Scotland vs Zimbabwe

On this tour both scotland and Zimbabwe teams are looking well balanced. So we can see some high pressure matches also on this tour and thats why all the cricket fans are waiting for the 2nd T20. his match is going very interesting for both the teams as well as for the cricket fans also.If Zimbabwe wins the toss and elects to bat first, Scotland does not have a good record of chasing big totals. Zimbabwe is more likely to win the match 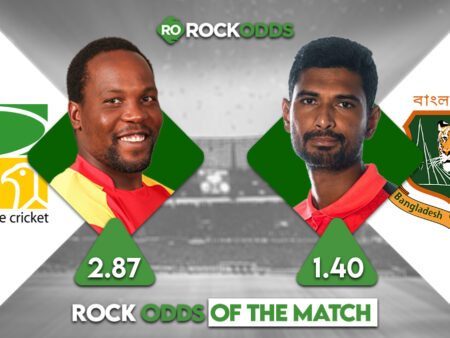 Betting Tips Cricket Prediction
Zimbabwe vs Bangladesh, 3rd ODI, Betting Tips, and Match Prediction
6 days ago
0
Search
Who we are ?